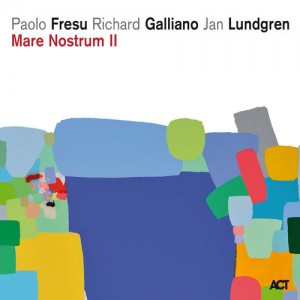 In 2007, trumpeter Paolo Fresu (Italy), accordionist Richard Galliano (France), and pianist Jan Lundgren (Sweden) released their first “Mare Nostrum” album to great critical acclaim. Over 150 concerts and nine years later, the three musicians have finally come up with the second installment of their working group: “Mare Nostrum II” will be released this Friday.

The beauty of this music is best described with the very first track “Apnea”: an immensely lyrical, melancholic piece with an unrivalled coziness and an elegant melody that is really unheard-of. A masterpiece and one of three compositions by Paolo (all three have contributed three pieces each, with the rest of the album being traditionals and classical pieces). Or maybe Jan Lundgren says it all with the title of one of his tunes on the album: “Blue Silence” is all about eliminating notes, about the greater mood and atmosphere and tenderness of the piece. It reminds me of an early 80s ECM album by Chick Corea and Gary Burton with its affectionate resonance.

There is an infectious exuberance in the Galliano track “Aurore” which sounds like a veritable anthem – never shallow, though. As if keeping the big picture always in mind. Jan arranged the Swedish traditional “Kristallen Den Fina”, about the love to a girl of noble virtue who is supposed to shine like the sun or the stars in the sky, like a crystal. Paolo has a wonderful appearance here. Richard’s “Giselle” sounds like a 60s French chanson, with its mournful and melancholic attributes it cries out for a lyric.

Jan caresses the unagitated melody of “E Varie Notti Tre Vie Notai” before Paolo, the composer of this little beauty, chimes in and Richard serves as a pillowy background cushion. We are also treated to an interpretation of Erik Satie‘s “Gnossienne No. 1”; Richard’s luscious arrangement brings some excitement and imaginative decoration to the proceedings. And there is more chansonesque work in the uplifting little piece “Lili” (Galliano), but also some drama and wit in “Leklat” (Lundgren) and pure serenity in “Le Livre D’un Père Sarde” (Fresu). What the three musicians have accomplished here is an impeccable labor of love for the poetry and lyricism in the music.

On a fitting closing note, they interpret Claudio Monteverdi’s “Si Dolce È Il Tormento” as the epitome of poignancy.