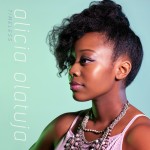 At first I thought oh no not another version of “Somewhere Over The Rainbow” and “Amazing Grace”.

But then after I listened to the first few bars of the opener “Truth In Blue”, she already had me convinced. Alicia Olatuja’s strong, robust and yet crystal clear voice had changed my mind. Her debut album “Timeless” is one of the most promising vocal debuts of the past several years. The 30 year old singer from St. Louis gained international recognition with her breathtaking performance at the 2013 inauguration ceremony for president Barack Obama. She also sings with the Brooklyn Tabernacle Choir since 2007.

And her Gospel roots shine through on a lot of the albums ten tracks. Her warm mezzo-soprano voice has been polished over the years by a lot of musical theater and opera work, but she is equally at home in the Jazz world. Her beautiful “Serrado”, sung in Portuguese, is backed by bassist Christian McBride and it’s a supremely catchy song which highlights the aerial and light touch of Olatuja’s instrument.

Elsewhere, harmonica great Grégoire Maret is featured on the classic “Stay Gold”. My favorite version of this Stevie Wonder/Carmine Coppola composition has always been that by the Isley Brothers from their 1985 album “Masterpiece”. Up to this day I have to add. Alicia’s version is simply beautiful and the addition of Maret’s magic harmonica sounds like the perfect pairing.

There’s also a cover of Michael Jackson’s “Human Nature” and again, she puts her strong and powerful touch to it as well. Also featured on this superb production are pianists Jon Cowherd and Christian Sands, her husband Michael on bass (they also work together  as the Olatuja Project), Jaleel Shaw, Ulysses Owens Jr.

It is also no wonder that Dianne Reeves recently gave her great praise. Listen to “Love Me Still” and “In The Dark” and you”ll get the connection. As for the classic songs mentioned at the beginning, they’ve really been given a fresh and outstanding new treatment.