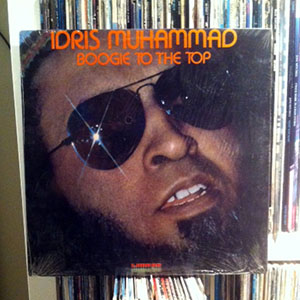 He would have been 75 today: Leo Morris, or Idris Muhammad after he converted to the Islam, was one of the most sought after drummers not only in Jazz, but in Soul and Funk as well. The list of people he has worked with is sheer endless.

The album cover shown here is from “Boogie To The Top” which he recorded for Creed Taylor‘s KUDU Records in December 1977. He was trying to hop on the disco bandwagon which a lot of his peers did at the time. But in his case, it worked out well because the album features a lot of his massive drum work plus top players like Ronnie Cuber, Jeremy Steig, Will Lee, Hiram Bullock, and Sam Figueroa plus in-demand session singers Frank Floyd, Zachary Sanders, Ray Simpson, and Ken Williams.