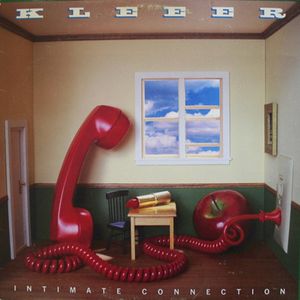 The group Kleeer consisted of songwriter and drummer Woody Cunningham, bassist Norman Durham, guitarist and keyboardist Richard Lee, and percussionist Paul Crutchfield, with Woody taking over most lead vocals and Norman as main singer on several songs. They have released a timeless all-time favorite to my ears: the 1979 classic “Open Your Mind” from their second album “Winners”. Always on my iphone playlist.

The last two albums came out in 1984 and 1985 and were produced by Eumir Deodato. By that time, the synth programming and heavy use of all kinds of OB and DX computers took over the musical landscape and generally, the mid-80s weren’t really healthy for Soul and R&B. But, there are a few songs on these two albums, which are now available on one disc, which still resonate today. “You Did It Again” from “Intimate Connection” still has some powerful vocal work and even though the quirky sounding drums and keys sounds are something you have to get used to, this mid-tempo groover works. As is the wonderful two-stepper “Go For It”.

The one track that really did it for me back in 1984 when the album came out and that still is hot today, is the bass-heavy title track with the haunting synth part. And then there is the groove ballad “Next Time It’s For Real”, a funky tune with a catchy hook. The brass work on “Break” is cute and intoxicating (with Clifford Adams on trombone, among others). And then there is “Tonight” with its funky guitar, bass, and super sexy vocoder vocals. Still a thrill some 30 years later. The other two tracks I think are neglectable.

The final album for the group actually boasted only one real highlight. And this particular track is simply outstanding today as when it came out in 1985: “Take Your Heart Away” has some precious moments and an irresistible hook with some wonderful backing vocals. “Lay Ya Down EZ” was a fair enough attempt on revisiting “Tonight”. And “Never Cry Again” also has its shining parts, mostly in the vocals. Most of the set though really loses its momentum due to the heavy synth and drum programming parts. Woody has released two solo albums since (in 1997 and 2000) and it is always a delight to come back to some Kleeer music.