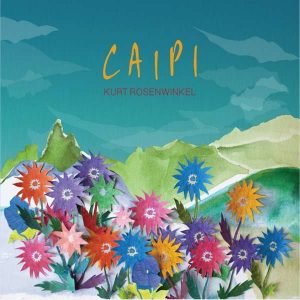 Guitarist Kurt Rosenwinkel has recorded his new album “Caipi” in Berlin’s Heartcore Studios and has named his own, new label Heartcore Records. The first release on his new imprint is his own album where he not only plays acoustic and electric guitars, but electric bass, piano, drums, percussion, synth, and casio, and where he sings. The result: a jazz-pop-Brazil hybrid that is so very entertaining and a pure joy to listen to that I would depict it as the first real highlight of the year.

On the opening title track which sounds like a jazzed-up Vinicius Cantuária and “Kama”, where Pedro Martins helps out with his voice (as the 23-year old does on most of the tracks in addition to playing drums, keys, and percussion), the hypnotic nature of the material on this album comes to the fore. The music continues in totally compelling ways with the breezy “Casio Vanguard” with its exotic vocals and lyrics by Antonio Loureiro. This music is the perfect soundtrack for the upcoming spring season and is destined to stay on constant repeat at home, in the car, on the phone, at work. Truly just what we need – a very necessary and beautiful form of distraction.

Kurt continues his explorations into formerly completely unknown territory with another densely atmospheric vocal cut which also features the voice of Kyra Garéy alongside his own vocals and those of Perdo Martins (who will be one of the next artists to release an album (“Vox”) on Heartcore), reminding me at times of the best Pat Metheny/Lyle Mays period and its ultra-cool meshing of styles and sounds. The breakbeat and offbeat character of “Chromatic B” with its grooving underpinning slightly moves away from what might be described on the surface as the lighter sounds from the first four tracks. There is even an alternative-rock approach with the uncannily sympathetic vocals on “Hold On” which has some similarities to early 80s UK synth pop – and the most striking elements of it. It is the perfect pop song!

The mood is changed to melancholy and sweet purity for “Ezra”, a breathtakingly beautiful ballad with a sensual and sexy tenor sax solo by Mark Turner. The pulsatory groove behind the piece is magically enhancing the vast breadth of the slowly developing mood track. Amanda Brecker helps out with her voice on “Little Dream”, another groove-heavy, very atmospheric vocal track that veers towards the alternative pop world in its chorus and has more of those mesmerizing voice arrangements. Eric Clapton has a cameo role on guitar here as well.

It’s back to those Cantuária-isms for “Casio Escher”, another one of those highly infectious Brazilian tunes where wordless vocals, softly thumping drums and Kurt’s guitar come together for a perfect symbiosis before Mark sets in to accompany and accentuate the otherworldly melody and finally he and Kurt play some lines in gorgeous unison. And there is more: the voice of Zola Mennenöh putting an extra accent on the excellent “Interscape”, another one of those pieces reminding me of the Pat Metheny Group, this time circa “Letter From Home” where he used the voice and percussion of Pedro Aznar. Another brilliant groove. The final cut here, “Little B”, features more of Kurt’s virtuosic guitar playing (alongside more of those infectious vocals) that is probably too seldom heard for his diehard fans.

What an utterly beautiful surprise. Heralding the caipi season a bit earlier this year.