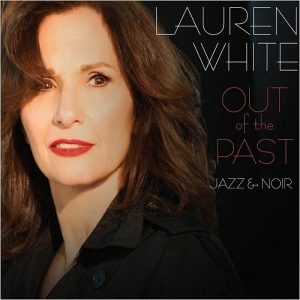 Film noir, that special genre that was defining the 40s and 50s mystery and crime movies, gets a new twist with singer Lauren White‘s new album that was produced by Mark Winkler and features a great cast of musicians, among them Mitchel Forman, Trey Henry, and Abe Lagrimas,Jr. as the rhythm section plus arrangements by Kathryn Bostic.

There are three tracks that are also featured on “Film Noir”, the 1989 album classic by veteran and legendary singer Audrey Morris who perfectly captured the sound, mood and atmosphere of those movies on her album. And Lauren is successful at that as well and especially on the opening track, a new composition by Mark and Joe Pasquale called “When All The Lights In The Sign Worked”, creating that special haunting moment those genre-specific songs are known for. A sexy, thrilling, jazzy and pulsating entrée to this fine album.

Next up is “He’s Funny That Way” from “The Postman Always Rings Twice”. Picture a late-night club scene with the elegant chanteuse trying to bewitch the audience. And “Again” reminds me of that afore-mentioned Morris album. Subdued, restrained singing painting arcane pictures. Things get swinging on Peggy Lee‘s “I’m Gonna Go Fishing” (from “Anatomy Of A Murder”) and Lauren again shows her versatility here since she is also capable of delivering a romping twister.

I’m not really into the Spanish-tinged “Amado Mio” (from “Gilda”), but the little medley of “Laura/The Night We Called It A Day” makes it all worthwhile again – imagine the Charlie Haden Quartet West revisited with Lauren’s sensuous vocals. Lauren gets hip again on “You Kill Me” and speaking of Charlie Haden, the album ends on a beautiful and delicious note with “Haunted Heart”, the Arthur Schwartz/Howard Dietz classic that comes with piano only and ends this delicious set on a sweet note.