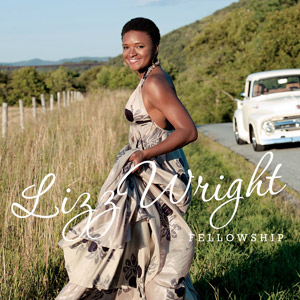 The last time I saw the amazing singer was in a duo setting with Raul Midón at New York’s Highline Ballroom. And her last album is the 2010 release “Fellowship”. It’s about time that Lizz Wright is coming up with something new don’t you think.

Concord Records announced yesterday that she now has signed with the label and that she has entered a recording studio in Los Angeles. The new album is still untitled and will be released on September 8th. Lizz is working on her new project with producer Larry Klein who in the past has worked with Joni Mitchell, Herbie Hancock, Madeleine Peyroux, and Melody Gardot.

The Soul, Jazz, Pop and Gospel singer has a few special guests on her album which is going to be a mix of cover songs and collaborations with Toshi Reagon, J.D. Souther, David Batteau, Maia Sharp, and Jesse Harris. The band she’s recording with features Dan Lutz, Pete Kuzma, Dean Parks, Vinnie Calaiuta and Kenny Banks.

So far, the 35 year old singer is scheduled for Wolfsburg’s Movimentos Festival on May 8th, Bonn Jazz Festival on May 9th, Hilversum on May 10th, Frankfurt’s Women of the World Festival on May 15th, Brugg on May 17th, Bratislava on May 18th and two shows at Amsterdam’s Paradiso on May 20th and then again on October 23rd. She will also play in Montreux (July 6th), Stuttgart (July 8th), and Zurich on October 29th.