Pianist Lucas Heidepriem opens his new trio album “Silence In Motion” with a dreamy solo intro before Johannes Schaedlich on bass and drummer Peter Erskine join in. “Falesia” is a truly fascinating trio piece with almost sacred qualities and some intensive repetitive patterns. 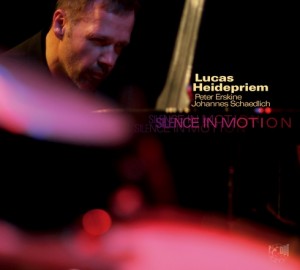 And his very lyrical playing continues on “Second Steps” with its chamber music-like approach and bassist Schaedlich singing to and with the leader in a well-crafted quasi-solo. There are hints of trance-like melodies which are pushed aside after a few chords. The tempo is slightly up on “Mountain Dolphins” where Peter has one of his signature purifying, but short solos. It’s really a pleasure listening to the three of them exchanging ideas and picking up themes and motives from each other.

The melancholy continues on “Findus”, a sweet paean of structure and subtlety. There is a genuine flow on “Check Wire” which also has its gloomy moments. And then there are some Keith Jarrett-isms on “Elemental Soul”, not exactly in the way Lucas is playing, but more in creating a certain mood and atmosphere in his improvisations and little, abstract lines.

There is just one non-original here, the Jimmy van Heusen classic “Darn That Dream”, easily fitting in with its mellow theme and showing the leader’s versatile skills as an avid interpreter of the Great American Songbook. This is only his second trio recording after the 2008 release “Next Return” but it sounds as if the three of them have been playing together forever (Johannes was on that particular record, with Dirk Schilgen on drums). The ending of the standard here is especially beautiful.

We also get more effervescent piano playing on “You Of All”, but the whole output and joint collaborations stay coherent and in sync. And finally, there are some joyful, open moments on the album closer “Snow Angel”. Lucas Heidepriem and his trio will be on tour in 2016. Details will be announced soon.