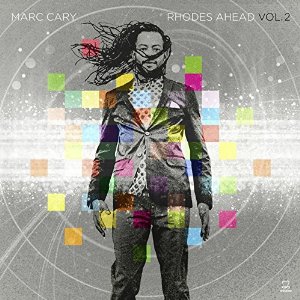 Rhodes Ahead Vol. 1 was released by pianist Marc Cary in early 2000 and I’m still going back to that album with its amazing Rhodes and Moog sounds of “Making Love, Making Music” (destined to become a Fusion classic), the housey “Inside Yourself”, the dreamy “Home Comin'”, or my favorite from that album, the irresistible soulful bliss of “Take Me Higher”.

15 years later and Marc has come up with Volume 2 and has also brought back Tarus Mateen on bass and Sharif Simmons on vocals. The new album starts with a 35-second intro where the sparkling of the Rhodes is introduced and the track segues into the Harold Mabern composition “Beehive” and features some amazing trumpet work by Igmar Thomas. Tarus on bass and Terreon Gully on drums push the piece forward with driving force and Marc plays an exceptionally well-crafted solo. When the trumpet comes chiming in, the cut is veering towards some frantic and open looseness.

The exotic tabla of Sameer Gupta takes “7th Avenue North”, a mild and mid-tempo piece, to some extra spheres – it’s a brilliantly executed, warm and groove-laden little masterpiece. Marc’s programming here is superb. “Eassaouira Walks” is a hypnotic journey with a repetitive structure that only really works well into the song and then doesn’t leave your ears for hours. “Astral Flight 17” comes closest to some of the moods and sounds of the first album; it’s a wizardry drum and bass breakbeat cut with additional tabla flavors and some spacey Rhodes and programming work from Marc which is simply astounding.

“African Market” is arranged from traditional Gnawa spiritual rhythms and sounds like an inspiration from Joe Zawinul‘s “Black Market”, the Weather Report album from 1976. It’s enhanced here by some enticing keyboard work by the leader. “For Hermeto”, a dedication to the great Hermeto Pascoal I suppose, is a reminiscence of the Brazilian multifaceted maestro. Extra spice is added by violinist Arun Ramamurthy and guitarist Aurelian Budynek on the pretty wild “Spices And Mystics”, a sizzling, simmering and exotic tune.

There is some Gil Scott-Heron-ism in the tense Rhodes incantation of “Below The Equator” and the hands-on approach of “You Can’t Stop Us Now” is pretty enjoyable. The final “The Alchemist’s Notes” with spoken word by Sharif Simmons somehow sums up the atmosphere and circumstances of this album: there is an alchemist at work.