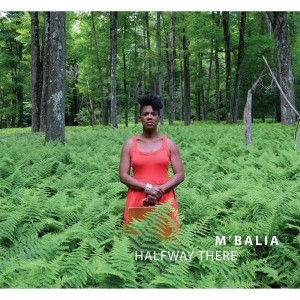 Philadelphia-based singer M’Balia Singley opens her debut album “Halfway There” with a witty, at times sarcastic story about financial struggles, backed by the sometimes bluesy, sometimes free-flowing piano by producer Orrin Evans. You wouldn’t guess that the song turns out like this after hearing the opening, pretty free improvisational moments.

M’Balia’s thick, strong voice with its wide range captures everything here from swing to the blues, from gospel to soul and jazz. Her vibrato on the word “behave” on the Frank Loesser classic “If I Were A Bell” is just perfect, not too much, not too vague. I often find myself trying to compare singers to any well-known, established artist but couldn’t come up with someone in her case. Which is good, I think.

Another thing worth a mention is certainly her songwriting – three songs on her album are originals. The uplifting, self-critical title song is underscored here by a thumping drum work courtesy of Byron Landham and some sympathetic light backing vocals by Orrin. Adding svelte touches on his guitar is Tim Motzer. And she gets more folky and inspirational on “Don’t Bet Against Me” which comes with organ backing by Luke Carlos O’Reilly. “And I’ll spend my whole life trying to show/That I’m worthy to those I don’t know” – the Gospel according to M’Balia.

Thanks to the funky bass of Mike Boone and the grooving piano work of Orrin in addition to rolling drums by Gene Jackson, her interpretation of “Softly As In A Morning Sunrise” doesn’t get stale. M’Balia manages this well-worn classic with aplomb and grace. There is something missing in her performance of Duke Ellington‘s “Come Sunday” though and I don’t really like the ending – maybe I’m simply too entrenched with Abbey Lincoln‘s sublime version from her 1959 LP “Abbey Is Blue”. At least this one again has a pretty sexy arrangement.

There are two versions of the standard “There Is No Greater Love”: an intimate and sloooooooow duo setting with Orrin Evans with Orrin’s superb playing outshining the singer here I think. On the full band version, Orrin plays some outstanding stuff during the intro (check out his own “The Evolution Of Oneself”, reviewed on these pages) and M’Balia is sounding much more at ease and comfortable than on the duo cut. My personal highlight is the album’s closer, a stunning version of “That’s All” with some wonderful piano arrangement and M’Balia sounding most charming. “I wanted it to be a little imperfect”, she says in the press release to the album. And she succeeded. In a nice way.