Twenty more quality soul gems from the Real Side Soul Coalition have come my way – numbers 3, 4, and 5 were also reviewed on these pages and the rare 1974 “Funny How We’ve Changed Places” by the great Debra Anderson opens up this great collection of songs which were recorded between 1969 and 1985. The Generel Crook‘s “Thanks, But No Thanks”, also from 1974, sees the light of day on CD for the first time, as do several other tracks from this superb, uplifting, and highly recommended soul set. The short brass section on this particular track is worth the trip alone. 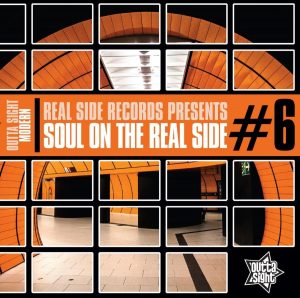 The lushly orchestrated “You Got To Know Better”, high on percussive backing, by Touch Of Class, a Philadelphia-based four-member group with classy vocals by brothers Gerald and Pete Jackson, is up next. And the obscure “Woman” by The Nicky Newarkers from 1976 is another pre-disco masterpiece, produced by Jerry Ross who masterminded the classic “Sunny” by Bobby Hebb. The background vocals on the breezily flowing “Better Late Than Never” by Diane Ducane, another previously unknown singer to me and equipped with a really unique voice, is simply irresistible. We also get a Holland-Dozier-Holland piece here by Tyrone Edwards and his 1974 “Can’t Get Enough Of You” – pure Motown soul which was not released on Motown though, but on Invictus.

Our all-girl vocal group favorite Honey Cone is featured with “If I Can’t Fly”, which totally flopped the charts in 1973, but sure sounds brilliant more than 43 years later. High-flying strings, fantastic vocals as we can expect from the girls, on one of their last recordings before they split up. The Whispers are here, too, with one of their early recordings, years before they came out with their first full LP: the 1969 “I Can’t See Myself Leaving You”, with the already unique-sounding Scott twins (I think it is Walter on lead vocals here). Another Holland-Dozier-Holland production is “Something New About You” by Silent Majority, a formerly unknown band to me as well. Pure early 70s classic soul. You can’t do anything wrong with Willie Hutch and the sweet “When A Boy Falls In Love” from 1970 is just magic – one of the highlights of the set here even though it borders on the edge of the syrupy side of things, but still an amazingly catchy track.

Believe it or not but I was never really a fan of Wilson Pickett, so I skip the 1973 “Mr. Magic Man” and continue with the Ray Charles-produced 1975 gem “I Need Your Love” from soul/funk pianist, singer, songwriter and arranger Clydene Jackson – a tune from her debut album “Fresh”. And a welcome return is Weldon Irvine with his superbly grooving “I Love You” from his 1976 “Sinbad” album with Don Blackman on vocals and a tune reminiscent of Marvin Gaye’s best tunes from that era. There is another first-time-on-CD track here from the very rare Wood, Brass & Steel album “Hard & Heavy” – the very sophisticated “Open Up Your Heart”. The youngest track on offer is “One Time To Make It Right” by The DMX Affair, complete with the typically quirky production methods of the mid-80s. Gary Byrd, who had a major rap hit in 1983 with “The Crown” featuring Stevie Wonder, is included here with another rap track, but from a decade earlier: “Soul Travelin’ Pt. 1” sees the light of day on CD for the first time here, his track dedicated to other soul contemporaries of the time, like Stevie Wonder, Curtis Mayfield, Isaac Hayes, or the Jackson Five.

The remaining cuts are a Sylvia Robinson-produced 1972 track by Lonnie Youngblood from War, the solid “I Only Hurt Myself”, a 1976 Billy Paul tune from one of his weaker Philadelphia International albums from 1976, “Let ‘Em In”, the still cute “I Trust You”, a very short Jon Lucien tune from his second album “Rashida” (1973), written together with Dave  Grusin, the extremely catchy bass-and brass-heavy “Would You Believe In Me”, and a 1972 obscurity by former The Platters vocalist Sonny Turner and Sound Unlimited, the midtempo “Now That You’re Gone”, bringing this wonderful collection to an easing ending.