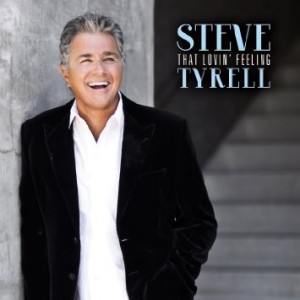 Steve Tyrell, the singer with that raspy voice and a little country twang, got his start in the record business early when he had the chance to work at the famous Scepter label. Soon enough, he produced songs for Chuck Jackson or Maxine Brown and promoted the records for Dionne Warwick. It was the time where he also met all the now legendary songwriters whose songs make up the fifteen tracks on his new album. It is a warm dedication to the Brill Building, the office building in Manhattan which housed recording studios and industry offices where many of the now classic songs were written. Tyrell considers them to be the New Standards.

And with all standards, everyone has his or her own favorite recording of songs like “You’ve Lost That Lovin’ Feeling” (written by Barry Mann, Cynthia Weil, and Phil Spector), “Any Day Now” (written by Burt Bacharach and Bob Hilliard), or “Up On The Roof” (by Carole King and Gerry Goffin). The charming factor here is that Tyrell managed to bring in a lot of the artists who made some of the songs famous or were involved writing it. Bill Medley for example, who as part of the Righteous Brothers, sang the title track back in 1964, can be heard here as a guest vocalist. At 74, he still sounds good on what is considered to be the most-played song in the history of American radio.

“There Goes My Baby” (the Number 2 hit in 1959 by The Drifters) has a brilliant back-up band with Paul Jackson, Jr., Reggie McBride, Gregg Phillinganes, and the late Ricky Lawson, but they never come to the fore but stay well-behaved in the background. “Be My Baby”, which went to Number 2 in 1963 by The Ronettes (consisting of Phil Spector‘s wife Veronica and her sister Estelle and cousin Nedra), is backed up here by Tyrell’s daughter Lauryn and singer Judith Hill and was arranged by one of the songwriters, Jeff Barry. It is more or less a family affair and a nostalgic one, enforced by Tyrell’s retro style. Perfectly fitting the 60s. Even Neil Sedaka, who will turn 76 in March, has a guest spot in “Laughter In The Rain”, his Number 1 song from 1975.

Some of the songs are just too much to bare, like “Groovy Kind Of Love”, the 1966 Number 2 hit by The Mindbenders or “Rock and Roll Lullaby”, which was taken here from the B.J. Thomas album “The Living Room Sessions” are both on the verge of getting too corny.

“On Broadway” features one of its songwriters, the now 76 year old Barry Mann on vocals. He was also responsible for writing the brilliant “Just A Little Lovin’ (Early In The Morning)”. But come on, who could sing this tune better than Carmen McRae on her 1970 LP “Just A Little Lovin'”. Sublime. Definitive.