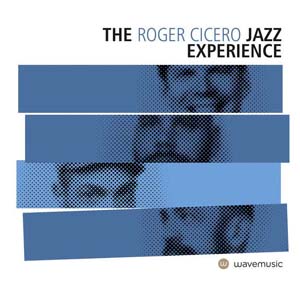 German jazz and pop singer Roger Cicero, who has worked with the Horst Jankowski Trio in the past, has come up with a new album with his quartet that has been working together for about two years. Maik Schott on piano, Hervé Jeanne on bass, and Matthias Meusel on drums accompany the singer on a repertoire consisting of jazz standards and songs of more contemporary songwriters like Nick Drake, James Taylor, Amos Lee or Paul Simon.

He starts off with the classic “No Moon At All” which includes an unexciting scat solo – I’m not the biggest scat fan anyway. Roger really sounds best on the more pop-oriented songs on the album: his charming voice which sometimes gets a bit nasal, but not in a distracting way, works well on the Taylor song “Shower The People”. He also covers a track from the brilliant Amos Lee: “Keep It Loose Keep It Tight” turns into a beautiful, soulful ballad. I much prefer the original from Amos’ 2005 Blue Note debut, though. But the arrangement here is pretty cute with a bluesy piano by Matthias.

Same applies for Simon’s “50 Ways To Leave Your Lover” – its fancy arrangement which turns into a swinging affair for the chorus turns out to be quiet effective. The instrumental “Ocean Ways” is nice. Sort of a late-night piano interlude at some posh hotel bar. It works here as an interlude to Nick Drake’s “From The Morning” and again, it’s a fair enough cover with the band creating a sweet atmosphere.

But then, the last four songs destroy everything. His extreme accent comes to light on “Moody’s Mood” (especially in the words “weather” and “together”) and his changing to his falsetto voice in the second part is almost hurting. “The Long And Winding Road” is simply boring and brings nothing new to the table. Eddie Jefferson‘s “Benny’s From Heaven” has some very indistinct pronunciation in the intro and very obvious accent problems especially in the word “heaven”. I know this all might sound picky but it just makes the overall output and sound almost unbearable.