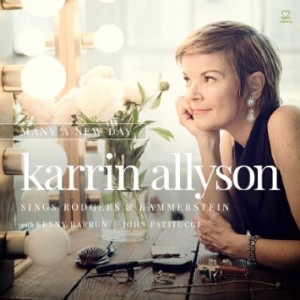 It really came as a surprise when I found out that singer Karrin Allyson would choose the songs of Richard Rodgers and Oscar Hammerstein as the theme for her first Motéma Music album. At the end of the day, hasn’t the Rodgers & Hammerstein songbook been recorded already with the definitive versions? Wasn’t Karrin more convincing in the past with tackling more contemporary composers? And what about her own songwriting? Her Christmas record showed very promising results in that regard.

Whatever the reason for this odd decision, Karrin and her producer Michael Leonhart thankfully didn’t choose the obvious songs here. Out of the 14 tracks on offer, maybe five have been recorded extensively by other artists. Karrin recorded “It Might As Well Be Spring” for her very first album in 1993, for example and it is not included here again. And the fact that she has Kenny Barron on piano and John Patitucci on bass as her only accompanists, adds to the cuteness of this recording which starts with a very soulful “Oh, What A Beautiful Mornin'”.

Five songs each are from the movies “Oklahoma!” and “South Pacific”. Four from “The King And I”. Some are more in the cabaret style like the title track and some are told by the leader in true storyteller fashion, like “I Cain’t Say No”. Kenny’s playing is elegant as usual, soulful, bright, and simply top-notch. Needless to say that John’s playing is first-class as well, as the consummate accompanist or the clever partner who punctuates the work (like in the same track).

And of course there are the moments that remind you how brilliant the melodies of Rodgers and the lyrics of Hammerstein are: the romantic “I Have Dreamed” is still a fantastic piece. In “Out Of My Dreams”, Kenny’s intro almost sounds like Stevie Wonder‘s “Overjoyed”, but of course quickly changes to another theme. John has a bouncing solo on this one. There is also an intelligent medley of “When I Think Of Tom” and “Hello Young Lovers” where the former is used as an intro to the latter. I must say though that I can’t listen to this particular track anymore. Too worn out.

There is some blues included here (“You’ve Got To Be Carefully Tought”), some unusual meter (“Something Wonderful”, but too short), some surprises (the often changing “The Surrey With The Fringe On Top” – my favorite version is still Peggy Lee‘s), and a waltz (the closer “Edelweiss”). 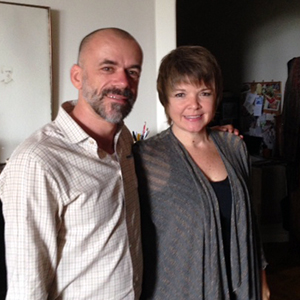 Meeting Karrin at her Manhattan home in October, 2013.

I have followed Karrin’s career from the very beginning and was lucky enough to meet her several times (including bringing her over to Berlin for a concert) and have always admired her work. I can’t help thinking though that she is much better with tackling more contemporary songwriters, Brazilian composers, or her own work. And who will finally dare to record the Stevie Nicks/Christine McVie songbook?