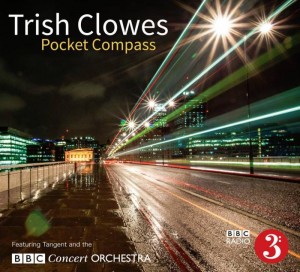 For her third album, UK saxophonist and composer Trish Clowes was able to record three of her compositions together with the BBC Concert Orchestra under the direction of André de Ridder. The album is supposed to be about journeys and the adventure begins with “Radiation” which is, in fact, a pretty bright and luminous number with the full orchestra playing the part as one of the improvised soloists here, backing the melody and moving graciously above and beyond.

For the next three songs, it is down to a quintet with pianist Gwilym Simcock playing the opening motif for “Question Mark” before Clowes hits with her soprano. The piece builds into a bit of a frenzy with electric guitarist Chris Montague, bassist Calum Gourlay and drummer James Maddren adding a lot of textures and layers before a meandering Simcock solo sets in. It’s a spiraling tune with excellent drum work. The intuitive playing between her and guitarist Montague and then later with pianist Simcock on “Porcupine” has a lot of suspense as if the tune is about to take off any moment, but stays in a sort of unfolded orbit.

“Symphony In Yellow” is, as the liner notes say, “inspired by Oscar Wilde‘s poem of the same name. The idea of a beautiful butterfly floating above the smoggy urban skyline of London and the gloopy Thames appealed to me!” The butterfly in the poem is compared to a bus crossing the bridge! Simcock has a bubbling solo here and later in the song, you can see the butterfly leaving the city into the big blue sky above the fog as guitar and sax unfold the story. The orchestra is back again for “Balloon” and brings a nice change of pace here again with an oboe chiming in making this, at least for a moment, a chamber-like piece. And that’s what Trish is known for: making connection between the classical and the jazz world with some of her other projects.

There’s also a song which was inspired by a trip to California with big wide open spaces and the sea and all (the relatively quiet “Pfeiffer and the Whales”), a Wayne Shorter tribute where the soprano is played assertive and with just the right amount of drama and for the final piece “Chorale”, the orchestra is back one more time backing and caressing the ideas of Trish Clowes.