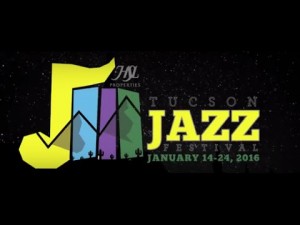 The Tucson Jazz Festival goes into its second year with a 10-day extravaganza and the not-to-be-omitted fact that the average high temperature during the 2015 festival was 71.5°.

So this year, the Tucson Jazz Institute Ellington Band will feature Jimmy Heath on opening day, January 14th. And Kenny Werner and his trio will revisit Erroll Garner’s Concert by the Sea on the same bill. Also coming up at the Rialto Theatre: Grammy-winning instrumental fusion band Snarky Puppy and guitarist Nir Felder opening for the group.

Wednesday, the 20th is all about piano: Jon Weber celebrates “115 Years of Piano Jazz” at Crowder Hall. Poncho Sanchez and his Latin Jazz Band will perform at the Fox Tucson Theatre on the 21st, Lizz Wright on the 23rd, and New Orleans vocalist and trumpeter Kermit Ruffins on closing night, the 24th.

Check out their website for all info, including tickets and hotels, right here: www.tucsonjazzfestival.org