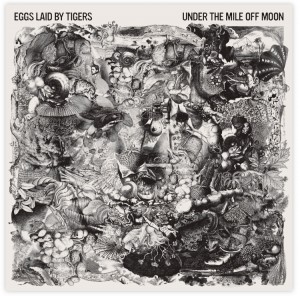 “Under The Mile Off Moon”, the 2012 album by Eggs Laid By Tigers

The concert series for contemporary jazz in Berlin is in its sixth season and has started yesterday with concerts from Michael Moore & Achim Kaufmann, Michael Abramovich, and Filter Bubble.

The series continues on September 24th with three more concerts: the Sugar Quartet consists of Grégoire Simon on viola, Paul Valikoski on violin, Boram Lie on cello, and Ole Brolin on live electronics. The group mixes classical and pop with electronic sounds. Also on board for the day is Uli Kempendorffs Field. The tenor saxophonist has assembled some of Berlin’s most vital and intense players to play his compositions: Ronny Graupe (g), Jonas Westergaard (b), and Oliver Steidle (dr). And then there is Liun & the Science Fiction Band: Liun is Lucia Cadotsch on vocals and synth, Wanja Slavin on synth, Samuel Halscheidt on bass, guitar, and synth, Marc Lohr on drums and electronics, and Peter Gall on drums. Lucia and Wanja debut their latest project which is inspired by Nefertiti, Scarface, Peter Greenaway, Kiddo, Nina Simone, and Alfred Schnittke. Interesting combination!

The series continues on October 6th with Pegelia Gold & Les Polychromes with their unconventional mix of New Music, Pop Avantgarde, and Jazz. Also on the line-up: Camilla Barratt Due & Alexandra Cardenas, the Norwegian accordion player and sound designer and the Colombian programmer and experimental improviser. And finally, Eggs Laid By Tigers, a Danish Jazz-Folk-Rock-Poetry trio with Martin Dahl, Jonas Westergaard, and Peter Bruun.

The concerts will be at Uferstudios in Wedding, Badstr. 41a.

For more info, visit the website:www.seriousseries.de