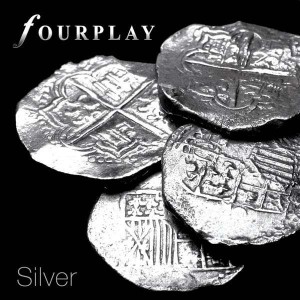 Fourplay are celebrating their 25th anniversary with the new album “Silver”. It is the third album which features guitarist Chuck Loeb in addition to the original members Bob James, Nathan East, and Harvey Mason.

Chuck wrote the very Pat Metheny-like opener “Quicksilver” with its light and breezy vocals. Many of the tracks have a silver theme in the title and most of the material was written by the band members who really have honed their craft into their distinctive style. The very typical Bob James composition “Horace” could have been from his 70s Tappan Zee days and displays the still very active and easy-to-recognize James skills.

Chuck and Nathan both wrote “Sterling”, another track to feature some of those meandering backing vocals and Nathan’s thick playing on the bass. The tempo is reduced for the Harvey composition “A Silver Lining” with its late-night feel and some sensuous playing by Bob and Chuck. No Fourplay album without special guests: former member Larry Carlton is heard alongside his guitar partner on the very funky “Silverado” with some Motown touches and catchy organ by Mitch Forman.

The other composition by Mr. James here, the very smooth and laid-back “Mine”, is getting a bit syrupy with its synth layers in the background and didn’t really catch on. The too pompous and bombastic “Silver Streak” isn’t really my cup of tea, either. Saxophonist Kirk Whalum is the special guest on the downtempo “Precious Metal”, another of Chuck’s compositions and relatively unoffending. The production on the record is, I guess needless to say, superb throughout. The album was executive-produced by Mark Wexler and Sonny Abelardo and mixed by Don Murray in Los Angeles.

More excitement comes in the shape of “Aniversário” which has some diversity in tempo and changes and is a pretty comfortable tune, again with the wordless vocals of Nathan, who wrote the song together with Tom Keane. And another ex-member is featured on the closing track: Lee Ritenour plays on the unobtrusive “Windmill” which also has additional keys by John Beasley.

Fourplay are on tour in Japan in September and will play London’s Ronnie Scott’s on October 21st and 22nd and return to New York’s Blue Note December 1st-6th.