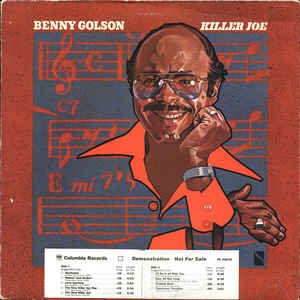 In the late 70s, a lot of Jazz artists tried to incorporate other genres and styles into their music, like soul and disco of the days and most of them were heavily criticized for it. Undeservedly so, I think. In hindsight, that period is especially fruitful – at least for me who as a teenager growing up on listening to BBC Radio and Radio Luxemburg and AFN, soaked everything in and my best example still is the music of Donald Byrd who released his most cherished and satisfying album to date back in 1981, with producer Isaac Hayes. A lot of the releases just didn’t reach me by then of course but I still think that Herbie Hancock‘s albums from that period are way above average. So I was aware of “I’m Always Dancin’ To The Music” by Benny Golson – but much later than its original release in 1978. The track is one of three bonuses on a reissued, remastered version of Benny’s 1977 “Killer Joe” album.

“Killer Joe” was of course one of many Benny Golson compositions which now have become standards and appears as “The New Killer Joe” with vocals by Mortonette Jenkins and as another, shorter version with narration by Ted Lange. The song is also added in its 7″ single version. Benny’s album was recorded at the famous Sigma Sound Studios in Philadelphia, using a lot of the studio musicians who were responsible for that special Philly sound of that period and Philadelphia International Records. Bobby Martin, who co-produced and arranged some of the tracks for the album, was also a member of the Philly sound staff. “Hesitation”, the album opener, features Benny on soprano sax (he plays it throughout the album) and the much in-demand trio of Carla Benson, Evette Benton, and Barbara Ingam on backing vocals. The discofied dancer makes way for Benny’s own “Walkin’ And Stalkin'”, a soulful groover with a full string section, Stanley Clarke on bass, and Bobby Lyle on keys.

The quirky disco tune “Love Uprising”, led by soprano again and intensified by rolling guitar work courtesy of Dennis Harris, Bobby Eli, and Roland Chambers. The sexy ballad “I’ll Do It All With You”, with vocals by Mortonette Jenkins and Drake Frye, is similar to some Billy Paul tunes of that time and shows Benny’s ability to write somewhat kitschy tunes too. There is a blues track here as well (“Easy All Day Long”, sort of a “Killer Joe” part two), accentuated by light percussion work from Poncho Sanchez and soft vocals in the back and cool keyboard solo from Bobby Lyle. The percussive “Timbale Rock” with Poncho again and Willie Bobo (who also narrates the tune) is a pretty funky affair with great guitar work from Ray Parker and a slick brass arrangement. The album closes out with the meditative “Tomorrow, Paradise” with electric piano floating on esoteric clouds. But there is no real killer track like “I’m Always Dancin’ To The Music”, added here as a bonus and reminding us of the vocal prowess of Maxine Willard Waters. 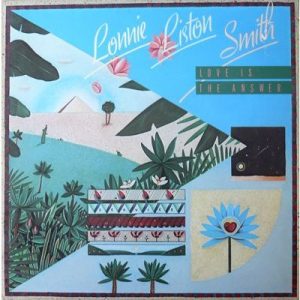 More satisfying is the re-release of the 1980 LP “Love Is The Answer” by Lonnie Liston Smith, another Columbia Records release. Lonnie had used his discovery, the young bassist and composer Marcus Miller, on his previous two albums (“A Song For The Children” in 1979 and “Exotic Mysteries” in 1978) and two tracks from each of those earlier albums appear here as bonus tracks. His final Columbia release opens with one of his signature groove-driven piano and electric piano-led jazzy jugglers, “In The Park” and continues with another typical Smith ballad, led by vocalist James Robinson and cool Rhodes by Smith. The brass-heavy “Speak About It” also has James on vocals (he later graced some pieces by the unforgettable Change) and chugs along with power and irresistible groove. The gracefully relaxing tone of “Bridge Through Time” has actually endured the decades and doesn’t sound dated at all – a clear indicator that Lonnie’s choice of different keyboards and synths has always been the right one.

Lonnie’s way of incorporating anything cosmic or space-driven in his music and approach, shines through on the organ-led “On The Real Side”, a fast and furious groover with astounding guitar work from Abdul Wali and superb drum work from Lino Reyes. Back to smooth and sensuous ballad mode on “The Enchantress” with an exotic flute by Dave Hubbard. Another typical LL Smith groove – relaxed, utterly laid-back and yet spaciously grooving. “Give Peace A Chance” was recorded by Lonnie on an earlier album (“Visions Of A New World”, 1975, and called “A Chance For Peace”), and moves along here in a tight disco version with James on lead vocals and more slick organ and backing vocals. The album closes with a peaceful, light and breezy “Free And Easy” before the two Miller tracks “Space Princess” and “A Song For The Children” speed up the pace again. Four 7-inch versions from various tracks of the 1980 LP are also added.