One of my all-time favorite vocalists, Carol Sloane, returns to New York for a one-night only duo performance with her longtime pianist Bill Charlap on January 11th. 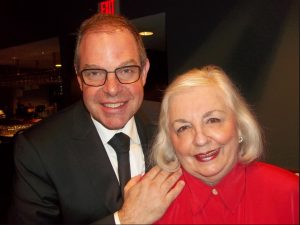 Carol started her professional work as early as 1951 (she turns 80 next March) and worked with the Les and Larry Elgart Orchestra before she occasionally stood in for Annie Ross in Lambert, Hendricks & Ross. She played the Village Vanguard in 1961 and also had a highly praised show at Newport (in her native Rhode Island) that same year. She later worked for Downbeat magazine and started to record in the early 60s (her “Out Of The Blue” on Columbia (1961)) is still amazingly hip and satisfying.

After her move to Boston in 1985, Carol remained active as a singer and recording artist and recorded a couple of great albums on Contemporary Records which were produced by Helen Keane and featured artists such as Kenny Burrell, Art Farmer, Clifford Jordan, Phil Woods, and Grady Tate. In 1992, she started a successful run at Concord Records where she released several critically-acclaimed albums. Listen to her wonderfully smoky voice and perfect intonation on “September In The Rain” (from “Heart’s Desire”) or her masterful swing on “I’m Way Ahead Of The Game” (from the brilliant 1993 CD “Sweet & Slow”) where she tells the story so elegantly and exquisitely that you think you’re in a conversation with her. Her phrasing on “Something Cool” or “When I Look In Your Eyes” (from the 1994 CD of the same name where she first recorded with Bill Charlap) is heaven sent.

Carol then recorded an album dedicated to her inspiration, Carmen McRae. Her rendition of “The Folks Who Live on The Hill” is simply outstanding (“The Songs Carmen Sang”, 1995). A bigband project followed in 1996, “The Songs Sinatra Sang” (listen to her “You Go To My Head” and try not to to be impressed) and an album with Clark Terry (“The Songs Ella & Louis Sang”, 1997) featuring a showstopping “Autumn In New York”.

Carol also had a two-week run at the now defunct Rainbow & Stars in New York in 1998 where I interviewed her for the first time (on the 67th floor of the Rockefeller Center building where there was something like a dressing room for the artists). I also remember that I flew in to New York on the day of her performance and almost fell asleep (shame on me, or rather the jetlag), but her beautiful, expressive, sensitive act kept me awake and when it started to snow up there on the 66th floor while Carol was singing Duke Ellington, the act was turning into a magical night.

Carol then switched to the DRG label for one album (“Romantic Ellington”, 1999) which featured Benny Golson but which didn’t really resonate with me. She was in much better form for her two Highnote albums of 2001 and 2003 (“I Never Went Away” features a sublime version of the Ivan Lins classic “I’m Not Alone” and “Whisper Sweet” has a pretty dramatic, yet beautiful “The Night We Called It A Day”). The last two recordings are on Arbors Jazz: 2007’s “Dearest Duke” has her singing Ellington again (with Ken Peplowski and Brad Hatfield) and “We’ll Meet Again” from 2009 features Bucky Pizzarelli and Steve LaSpina, along with Peplowski (there is a poignant “Where Are You?” included on this one).