He is one of the very few organists who doesn’t need to show off what he is able to accomplish with that monster instrument. I have listened to too many organ records in the past couple of years or so where the leader was simply playing too many notes and didn’t really care about the overall sound and finished track or that there are also other accompanists. That’s not the case with Dr. Lonnie Smith. Never has been. The way he eases through Wayne Shorter’s “Juju”, the first track from his new live album “All In My Mind” on Blue Note Records, can maybe best be described as extremely soulful, elegant, and deliberate. 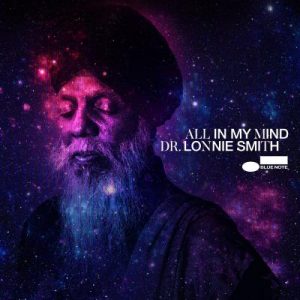 The seven tracks on the album were recorded in one of my favorite New York City clubs: The Jazz Standard on East 27th Street has been home to many unforgettable concerts and acquaintances since it opened in the late 90s. And many live albums have been recorded there: Russell Malone, Roger Kellaway, Bill Mays, René Marie, Lonnie Plaxico, Dena DeRose, or Fred Hersch have all released live albums from this almost hallowed cellar.

Dr. Lonnie Smith, the man with the turban, had already released half a dozen albuns on Blue Note in the late 60s and early 70s and his discography is not as extensive as you might think, but recently, he has come up with a few magnificent albums, most notably on Palmetto. But of course, LPs like “Move Your Hand” (1969) or “Drives” (1970) on Blue Note still resonate today and he never shied away from covering pop material. He puts his own, subdued stamp on Paul Simon’s classic “50 Ways To Leave Your Lover”, which during its 9 and a half minutes, also showcase the brilliant work of drummer Joe Dyson who stepped in here for Johnathan Blake, who plays the drums on all of the other tracks. And how sweet it is to hear the melody played by extraordinary guitarist Jonathan Kreisberg after a lengthy solo by the leader.

There is this cool understatement and well-versed notion and dedication to sound and style all over Dr. Lonnie’s playing – probably something that only a 75 year-old can bring to the table. Listen to the sheer beauty of Tadd Dameron‘s “On A Misty Night”, the forgiving aplomb with which he tackles the composition, the wondrous segue into swing mode after a few bars, and the determined, short exclamation point when he plays the refrain. His solos are never too terse, never too long, almost right on time and perfectly executed. For a change, Smith’s own “Alhambra” starts out exotically before it explodes into an organ/guitar/drums frenzy of sorts where Gina flattened her ears. “All In My Mind”, the title track and the second of his two self-written compositions on the album, features the beautiful, strong voice of Alicia Olatuja. A dramatic, introspective cut with bluesy undertones and with the bass register of the organ playing a vital role.

There is also another mellow piece, a soulful take on saxophonist and flutist David L. Hubbard’s “Devika”, and a joyful, upbeat “Up Jumped Spring” as the album’s closer. Dr. Lonnie Smith is on a short club tour in the US to support the release of the album and is also part of the “Blue Note At Sea” cruise from January 27th to February 3rd. The Dr. Lonnie Smith Trio with Jonathan Kreisberg and Joe Dyson also plays London’s Ronnie Scott’s on April 20th and 21st. He last visited Berlin back in November for the Berlin Jazzfest.