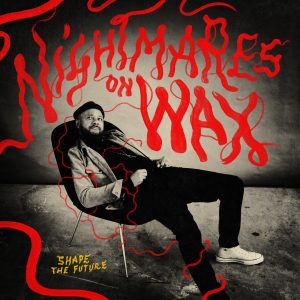 It seems as if Nightmares On Wax, headed by George Evelyn, have been like a steady accompaniment to us over the years. Five years after “Feelin’ Good” and 27 (!) years after “A Word Of Science” which broke new ground with its typical mix of hip hop beats, downbeat and trip hop, the story continues in fancy Nightmares On Wax fashion. Already released towards the end of last year as a single, “Citizen Kane” appears with two versions, one with singer Mozez, and the other also adding the rapping services of Allan Kingdom. Forget the latter version; what makes this album pretty appealing is the fact that most of the tunes unfold their attraction after a few listens, not right away. I wasn’t that happy with “Citizen Kane” at first when it was released in December, but now the compelling melody, the mesmerizing, gospel-inflected backing vocals and Mozez’ upfront, urgent style just grab me.

The album opens with a haunting, hypnotizing downtempo dub groove on “Back To Nature”, complete with warm keys and a thick string arrangement. The track features Kuauhtli Vasquez, a so-called roadman and spiritual chief of a Native American Church. And again, the cut works well and long after the last word has been spoken. The British-Ghanaian singer and songwriter Andrew Ashong adds a new color to “Tell My Vision”. His sonorous, soul-drenched vocals lift the tune into higher hemispheres, not moving it to a fast and furious climax, but rather letting it flow on midtempo turf. A brilliant soul cut. The eerie, reggae-induced title track probably comes closest to their very first album back in 1991, if that’s what you’re looking for. Its cinematic style and groove remind me of those “Nights Interlude” times. Don’t really like the vocals on this one, though.

Then there is the thick swampiness of “On It Maestro” with a sexy piano lead which for some reason doesn’t really go anywhere and “Tomorrow”, featuring LSK, a singer and songwriter from Leeds who seems perfect for this mix of reggae and hip hop and electronica, another irresistible groove. Which brings us to one of our favorite artists whose latest album “Wallflower” got a five-paw review on these pages last year. Jordan Rakei guests on “Typical”, a wonderful pseudo-blues cut that is just perfect for his extremely simpatico voice. A real winner. But sorry, I can’t stand the strangely compressed, almost tormented voice of Sadie Walker who sings on  “Deep Shadows”. “Gotta Smile” has its moments, but tends to sound the same and repetitious after a while with its more upbeat stance. It begins to sound samey too soon. And with “The Othership”, towards the end of the album, we get a moment of tranquility and poise again. Welcome back! Album release: January 26th on Warp Records.

Nightmares On Wax are on tour in Europe next month before embarking on a US/Canada tour.