Wes Anderson‘s animated movie “Isle Of Dogs” opens this year’s Berlinale tomorrow. Gina is especially happy about the fact that dogs play the main characters, all of them crossbreeds like herself. I was picking up my press badge earlier today and asked at the counter if I could bring my dog to the press screening tomorrow. I didn’t get a No for an answer, but not a Yes either. The director himself and lots of his famous actors responsible for the voice-overs will present the world premiere tomorrow. Among the guests: Bryan Cranston, Greta Gerwig, Bill Murray, Jeff Goldblum, Kunichi Nomura, Liev Schreiber, Koyu Rankin, Bob Balaban, Tilda Swinton, Akira Takayama, Yojiro Noda, Mari Natsuki, and the script writers Roman Coppola and Jason Schwartzman. 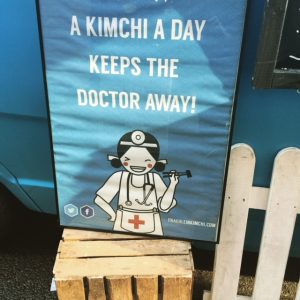 You can find us around Potsdamer Platz for the next 10 days and one of the very good things the festival has organized in the last few years is the Street Food market, in cooperation with Berlin’s Bite Club who are responsible for the winter warmers right in the center of it all. (The market started in 2014 and Bite Club is on board since last year). You have the choice this year between the famous Spätzle with cheese from the Allgäu region, brought to you by Heisser Hobel, veggie and organic burgers from Tommie’s Burger Joint with home-made buns, the best Kimchi in town from Fräulein Kimchi with South Korean specialties (I’m drooling already), Mexican classics, including some very really tasty bowls from Eddielicious, and classic empanadas from Uruguay brought to you by Pecados. We will make sure to taste all of them during the festival. And yes, we will go to the occasional screening or two as well….