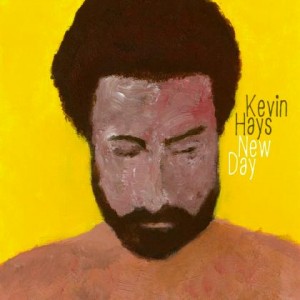 Pianist Kevin Hays, who has worked with Joshua Redman, Benny Golson, and Joe Henderson in the past and who recorded for Blue Note in the 90s, switches to Fender Rhodes, the omnipresent Wurlitzer, and vocals on his latest album “New Day”. After the very free-flowing opening Rhodes track, “Run To The Sun”, which also heavily features Rob Jost on bass and Greg Joseph on drums, Kevin adds Tony Scherr‘s guitar on the title track on which he also sings; recorded very upfront by producer Matt Pierson.

The track sounds like an alt-rock meets early 70s soul piece with Kevin’s strong vocals sounding like the young Bill Withers. Gregoire Maret is also featured on a very bluesy harmonica here. As you probably know, I’m a Rhodes addict so to hear Kevin focus a lot on it is simply fun. “Trudger’s Paradise” might as well be called Rhodes Paradise, complete with all the effervescing effects and sounds which come out of it. It’s another massive blues-drenched cut on here.

Things turn Brazilian on “Milton”, a dedication to Milton Nascimento, which he also manages to perfection including some amazing and embracing piano improvisation. I can’t help thinking about Bill Withers on his vocal tracks here. “The Sun Goes Down” at times has similar vocal and phrasing approaches as Bill has. The song could also be right out of the Minnie Riperton book.

Gregoire has a fiery, soulful solo on the midtempo “Kurtish” and blends well with Kevin’s piano and the well-balanced set changes to Rhodes again for the contemplative “All I Have” and the spacy, psychedelic “Sugar Man” and to a funny “Waltz For Wolleson”, most certainly dedicated to drummer Kenny Wolleson who shaped New York’s downtown and avantgarde scene in the 90s.

Jimmy Webb‘s “Highwayman” (originally recorded for the 1977 LP “El Mirage”) shows another, more folk-oriented side to Kevin’s vocal abilities. And it suits him well. And Kevin stays in meditative mood for the Rhodes-induced “Time Waits” before he ends this very entertaining set with a sexy vocal version of the album’s opener “Run To The Sun”.

Kevin plays at the BRIC JazzFest in Brooklyn on October 15th (with Nir Felder) and 16th (with Nate Smith), has some Italian dates with Gregoire from November 24th-27th, a gig in Düsseldorf on December 9th, and a duo performance with Sachal Vasandani at Rockwood Music Hall in New York on December 17th.