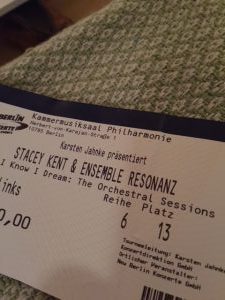 You could really feel the joy singer Stacey Kent had when she was sharing the stage with a 30-piece orchestra, the Hamburg-based Ensemble Resonanz under the direction of Francesco Bossaglia. The 18 strings and four flutes built a very harmonious, lush and concentrated cushion last night at Berlin’s smaller Philharmonie venue, the Kammermusiksaal. Mostly playing tracks from her most recent album “I Know I Dream: The Orchestral Sessions”, Stacey elegantly weaved through the music of Antonio Carlos Jobim, Serge Gainsbourg, or Literature Nobel Prize winner Kazuo Ishiguro’s lyrics. (Check out also my review of her album).

I have really expected her to deliver an excellent performance and wasn’t disappointed, but I think the real star was the orchestra. The arrangements on the Jobim pieces “Photograph” and “Double Rainbow” and “Vivo Sonhando” (the latter Getz/Gilberto classic not on her new album) were so rich and precise and full of finesse and passion that they really enhanced the already superb performance. There were instances when I thought of the great Claus Ogerman arrangements on the originals. It was really wonderful. And those Ishiguro songs, “The Changing Lights” and “Bullet Train”, seem to be just perfect for Stacey’s enunciated pretense.

However, I have never been a fan of the acoustics in this particular venue, having presented concerts there myself during my radio years. It is always difficult to use amplification on the vocals and so, even though I had a brilliant seat (6th row in the middle of rank A), I couldn’t understand a single word of what she was singing or telling. But mostly, the fascinating music did the talking anyway. The faster numbers like “Mais Uma Vez” were done with the right amount of aplomb, the slower pieces (they were far superior) like the beautiful Edu Lobo song “To Say Goodbye” were just pure romanticism. Even the worn-out standard “That’s All” was not clichéd, but executed in tender, fastidious fashion. I found myself indulging in the beautiful sound of the harp or the chirping flute  passages. Stacey also used her regular band of course, with her husband, saxophonist and flutist Jim Tomlinson, pianist Graham Harvey (who also switched to the Rhodes on a couple of tracks), bassist Jeremy Brown, and drummer Joshua Morrison.

“Waters Of March”, the second encore, was done as a vocal duet between wife and husband, but came over as more of a gimmick than an actual part of the proceedings and the poor guy on the vibraphone had the most spectacularly odd part of the evening: he wasn’t audible at all. Not for a single note or second. Stacey and the orchestra must be thrilled to play before a sold-out crowd this Wednesday at Hamburg’s Elbphilharmonie – as in most cases, Berlin audiences had too many choices again last night and so there were many seats left.