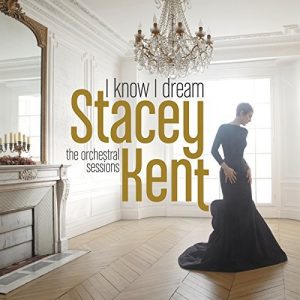 It was just a matter of time before this was about to take shape: Stacey Kent recording with a full orchestra. The arrangements are by Tommy Laurence, the sessions took place in London up until May of this year and Jim Tomlinson produced the album which really suits her fine.

There are a lot of similarities to the big orchestral albums that Antonio Carlos Jobim recorded with the great Claus Ogerman (like “Jobim” from 1972 or “Terra Brasilis” from 1980) on the first two Jobim tunes, “Double Rainbow” and “Photograph”. The lushness is there and the ostentatious flute/sax parts. But more modern sounds are featured here as well, like on the Rhodes-induced “La Rua Madureira”, sung in French. Graham Harvey‘s Fender Rhodes playing on this one makes up for a nice change here because I think that full orchestra albums with vocals somtimes tend to be a bit too much.

Stacey sings in French on two more cuts on the album: on a beautiful, solid interpretation of Léo Ferré’s “Avec Le Temps” and on a dramatic, chansonesque “Les Amours Perdues”, written by the great Serge Gainsbourg. Kazuo Ishiguro, with whom she has worked in the past, is back with a couple of tracks (which she also recorded before): “Bullet Train” and “The Changing Lights” both get a cute makeover and both really improve with the string arrangement behind. This is also a reminder that the latter has the potential to become a standard. Elsewhere, there is a wonderful version of “To Say Goodbye” which reminds me (at least regarding mood and atmosphere) of the late great Shirley Horn.

I didn’t resonate too much with “Make It Up” because of the lyrics (“I love you and you love me/And I can’t tell you why”), other pieces tend to be just pretty, like the title track. Actually I like her best when she tackles the Brazilian (and most of the French) tunes. “Mais Uma Vez” (written by Antonio Ladeira) works very well. The saudade just suits Stacey’s voice. There is not a lot to add to “That’s All”. Yes, the strings are nice, comforting, not kitschy. And there is the Stan Getz-iness again of Jim Tomlinson. But it’s kinda like “been there, done that” with this standard.

Stacey plays New York’s Birdland December 12th to 16th and is back in Europe for seven dates in January/February, with gigs in Hamburg and Berlin, among others, with the Hamburg-based chamber orchestra Ensemble Resonanz.