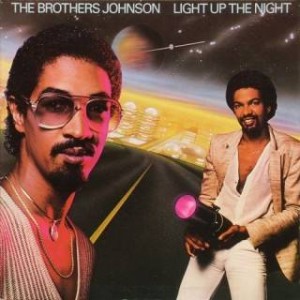 It is an incredibly sad week with so many of our good ones leaving us. Louis Johnson, one half of the Brothers Johnson, passed away yesterday at only 60 years old.

My first encounter with his amazing slapping technique was with their hit song “Stomp”. But that wasn’t the only one of course. “Strawberry Letter 23”, “The Real Thing”, “Light Up The Night”, “I’ll Be Good To You”, “Get The Funk Out Ma Face” were all high up on the charts. Thunder Thumbs, which was his nickname, also graced Michael Jackson‘s “Thriller” album and also “Off The Wall” and “Dangerous”, and literally thousands more. From Angela Bofill to Quincy Jones, from Herbie Hancock to Donna Summer, from Herb Alpert to Earl Klugh: his signature sound on the bass was part of the soundtrack of the second half of the 70s and the 80s. And yes, it is Louis playing the bass line on the timeless classic “I Keep Forgettin'” by Michael McDonald. The bass was especially made for him by the legendary Leo Fender.

Louis and brother George spilt up in the mid 80s and both continued to do session work after a brief solo career.  The often overlooked 1984 LP “Out Of Control”, produced by Leon Sylvers, features the brilliant “You Keep Me Coming Back” and an exceptionally well-crafted instrumental, “Tokyo”, written by Louis himself.