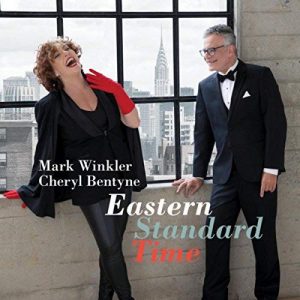 Five years after “West Coast Cool”, singers Cheryl Bentyne and Mark Winkler released “Eastern Standard Time” earlier this summer. From the West Coast Cool songs of the 50s which were the emphasis of their earlier effort, they both now focus on the Eastern coast with tunes associated with Blossom Dearie, Bob Dorough, or Peggy Lee.

Things heavily swing throughout the album, with Bob Dorough‘s classic “Devil May Care” starting off the session. The easy, happy, humorous “Rhode Island Is Famous For You”, a Blossom Dearie staple, makes a lot of fun here in its latest interpretation. Cheryl takes care of “The Gentleman Is A Dope” from the Rodgers & Hammerstein songbook, written in the late 40s and rarely recorded – there is a version on Rosemary Clooney‘s Concord album of Rodgers, Hammerstein and Hart songs which comes to mind. Cheryl floats through the lyrics, making it completely her own. Mark wrote the lyrics to the serious jazzer “Like Jazz” and to “I Could Get Used To This”, originally known as “Bumpin'”, a Wes Montgomery composition. Grant Geissman plays guitar on this one and pianist (and arranger Rich Eames) comes up with a cool solo, too. Mark’s capability of inheriting a song, whether it’s a straigthahead jazz tune, a bluesy track, a ballad, a cool swinger, or a pop ditty, still is amazing. It somehow transports you back in time. Marvelous!

But it’s on the seven duet tracks where both really gel and even though pieces like “The Best Is Yet To Come” seem to be worn out now, they come up with new twists and turns and let Bob Sheppard imaginatively play around on sax – the arrangement is pretty cool and certainly appropriate for this concept. I think we all have our own favorite version of “Spring Can Really Hang You Up The Most”, but the truly peaceful and tender version here, with guitarist Pat Kelley as the only accompaniment, shows why Cheryl has got to rank among this genre’s best vocalists, which can also be attributed to her lengthy involvement with The Manhattan Transfer of course. The way she chimes back in after Pat’s solo (reminding me of Ed Bickert here and there) for “Love came my way, I hoped it would last….” is a real treat. And her way of phrasing the word “tonic” really makes a difference. It has become the highlight for me on the album.

Speaking of repertoire, I think it’s a witty move to include Lou Reed‘s “Walk On The Wild Side” where both Mark and Cheryl show their versatility and ease for turning this 70s classic into a veritable jazz tune. And what a joy it is to hear Jackie & Roy‘s “You Smell So Good” again! With an arrangement focussing on the Latin and tender side of things and thus, squeezing the coolness and the swing out of the original, they nevertheless find a way to concentrate and filter the tune’s lyrical essence. I really like the final sequence on this. I think that for their next collaboration, Cheryl and Mark should adopt the Jackie & Roy songbook. Peggy Lee, the epitome of cool, is featured here with “Things Are Swingin'”, a rather solid and regular affair.

Which brings us to the end of this pretty cool album, a medley of “Ballad Of The Sad Young Men” and “Lies Of Handsome Men”, the latter of which is another Blossom Dearie-associated track and the former I first encountered on an album by Roberta Flack. It’s a wise choice for an album closer and shows yet again what a brilliant ballad singer Mark Winkler is. There is a sweet cello accompaniment by Stephanie Fife and the moment Cheryl comes in for “Lies…”, it is just magic. It’s as if the song was meant for her.