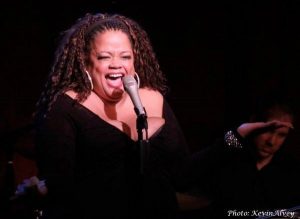 I had no idea that this would already be singer Natalie Douglas‘ 51st performance at Birdland and I never told anyone but I was originally scheduled to fly to Detroit on Monday and when I realized that she was singing at Birdland that night, I rescheduled and postponed my flight to Tuesday. Was it worth it? You bet it was!

For someone growing up with the music of Stevie Wonder and Stevie Nicks, this show simply was not to be missed. Starting off with a rousing “Superstition”, her set wasn’t all about churning out the hits, but I soon found out that she would dip much deeper into both musicians’ artistry. It all looks so easy and unagitated to hear her flawlessly breezing in and out of the tunes, keeping it pretty funky and soulful in the opening number or the Rufus & Chaka Khan hit “Tell Me Something Good”, or amazingly authoritative and just mesmerizing on ballads like “All In Love Is Fair”.

She pulled out the captivating and heartbreaking “Silver Springs”, which almost ended up on Fleetwood Mac‘s “Rumors” album, but never made it to the final mix (instead it was released as the B-Side to “Go Your Own Way”). What a smart and astute choice to include this in the mix. As was her choice of blending two pieces from each composer into one song and it especially made sense for “Lately” and “Dreams”. When she ended Wonder’s song with the words “Oh, I’m a man of many wishes/I hope my premonition misses/But what I really feel my eyes won’t let me hide/’Cause they always start to cry/’Cause this time could mean goodbye”, she went on with “Now here you go again, you say you want your freedom/Well who am I to keep you down”, the first words from the epic “Dreams”.

Natalie also did a song from Frau Nicks’ first solo album “Bella Donna” which came out in 1981 and which has a very special place in my record collection, too. On “Leather & Lace”, the original was done with Don Henley as duet partner, and on Monday night it was Natalie’s husband Billy Joe Young who played his part, with style and a sympathetic swagger that just fitted the tune. One of my favorite Nicks songs. Natalie also included “Higher Ground” and realized that a lot of the songs from that era (this one in particular from 1973) are still valid and tell the truth as it is today.

I was also very impressed by her other pairing of two songs; “If It’s Magic” and “Landslide” again made perfect sense – her strong and assertive voice and her fascinating aplomb did those two songs justice in a grandiose way. Keeping it celebratory and cheerful, since this was Martin Luther King day, she also did a strong performance of “Happy Birthday”, which was originally written by Wonder to establish a national holiday in King’s name, and which she managed to cross over with as much grace as is needed, especially given the fact that this particular song is nowadays used to the max for birthday parties and such. Which is alright, but there you go. It just shows how much preparation and alertness went into her set.

I was indulging in her delivery of “Rhiannon” and the encore “Signed, Sealed, Delivered, I’m Yours”, and ended up revisiting a lot of the Wonder and Nicks (and Douglas) catalog. What a treat!