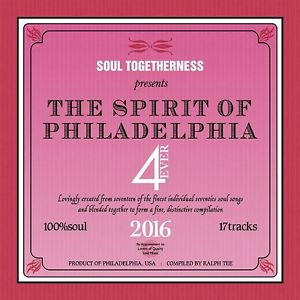 The Soul Togetherness crew has come up with the fourth Philadelphia sound collection and with 17 more cuts that were recorded outside of the famous Philadelphia International Records. The amount of obscure, rare, and hard-to-find cuts on this volume is astonishing. Even if you’ve been an avid collector for over 35 years, a lot of these recordings here are true diamonds.

And as usual, the notes to each track are informative and precise. The opening “How Have You Been” is by Everett “Blood” Hollins and features vocalist Jean Lang, who chimes in after a relatively long opening featuring immortal strings that are so essential to this particular sound. Vince Montana co-arranged this piece. The group Free Spirit only released two singles, one of which, “Love You Just As Long As I Can”, is released here for the first time in its Tom Moulton 12″ Mix.

There are only two tracks on this album which are part of my vinyl collection, too. One of those is “Ready, Willing And Able” from the 1981 LP “The Temptations” where Thom Bell has done one of his signature writing and production jobs that were so popular at the time, and still are to this day (remember Deniece Williams’ “Waiting By The Hotline”?). Ben E. King is featured here with a track by one of my favorite songwriters: “No Danger Ahead” by Sam Dees comes with cute background vocals. A 1976 soul gem.

The Futures were actually part of Philadelphia International for a short period (and recorded the indefatigable “Ain’t Got Time Fa Nothin'”) and are featured here with “Don’t Close The Book” from their 1975 “Castles In The Sky” album, another pure and raw soul stepper. There is another Tom Moulton mix here, a discofied “Merry-Go-Round” by the group Monday After, who also recorded only two singles and the 12″ is released on CD for the first time. The very simple-sounding “Life Is What You Make It” by Tapestry is one of the very few tracks here which don’t do it for me, but its sheer presence has to get a thumbs-up.

Billy Proctor & Love System are included with a Temptations-like “Keeping Up With The Joneses”; a mesmerizing hook and catchy production together with haunting vocals make this one of the best cuts here. From 1975. The strings are back in full demand on “All I Need”, a fair-enough midtempo soul groover by Anacostia (new name to these ears) from 1975, too. My favorite cut on the album is the Van McCoy-penned “Keep In Touch” by The Choice Four, again from 1975. Van McCoy put the group together and recorded three albums. Pete Marshall sings lead vocals and the outcome is pure class, its repetitive vocal hook towards the end is unbelievably enthralling and sexy. “I miss you so/cause you gave me someone to love” has stayed in my ear ever since I first heard the track. Brilliant!

Ronnie Dyson is included with a fancy “Cup (Runneth Over)” and his voice is always a joy to hear. John Davis wrote and produced the Philly Devotions with its falsetto-led “I Was A Lonely Man”, another disco-fied soul burner. There is another Thom Bell arrangement here, the 1973 “Fancy Meeting You Here Baby” by Lenny Welch reminds me a bit of “Didn’t I Blow Your Mind This Time” and has a wonderful hookline. Randy Muller (Brass Construction) arranged the strings on “I’m Ready To Give Up My Love” by Final Touch, a 1976 stormer under the guises of the Disco Corporation of America who were also responsible for “Never Can Say Goodbye” and the influence can be heard on this particular track, another gorgeous winner.

The Reflections only recorded one album and were background vocalists for Melba Moore. Here, the group is featured with “Day After Day (Night After Night)”, a percussive soul-drenched workout. Bunny Sigler co-wrote the solid soul swinger “Don’t Put Me Down” by The Finishing Touch. The album closes out with a deep and dedicated piece by The Tymes: the 1976 “All You Ever Wanted To Know About Love” is another great example why the Philly Sound is alive and in full bloom 40 years later.