This is a sweet tribute to Kenny Drew Jr. who passed away much too early at only 56 years old last year. Saxophonist Steve Slagle and Kenny had played in the Mingus Big Band (both can also be heard on the “Live In Time” album by the group, released in 1996). On the day of Kenny’s passing, Steve wrote “KD Jr.”, a fitting tribute to the great pianist. In comes Bill O’Connell, a pianist who has worked with Dave Valentin, Sonny Rollins, and Chet Baker. On this particular track, the brilliance of both artists’ energy and eloquence sums up the entire album: it’s a fierce showcase in listening to each other and coming up with melodious passages and lyrical entities that are hard to match. Both of them are also active in Bill O’Connell’s Latin Jazz Allstars with several recordings for the New York-based Savant label. 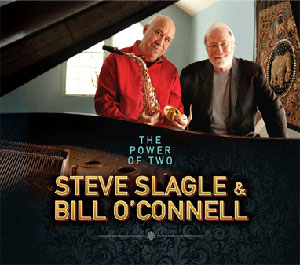 This recording actually reminds me of the wonderful Duo Series at the tiny Maybeck Recital Hall, recorded by Concord Records in the 90s (10 duo albums and 40 solo piano albums; all of them worth checking out) for its intimacy and intensity of having just two musicians at play. Two of those duo recordings, a Gary Foster/Alan Broadbent masterpiece and the ace Chris Potter/Kenny Werner album are in this high-quality league.

Steve switches to flute on the Bill Evans classic “Peri’s Scope” (sounding very inspiring and Herbie Mann-like), on the popular Dave Brubeck composition “The Duke”, and on the very short and humorous “Whistling Spirits”, written by both Steve and Bill which closes the album. Of the five compositions by Steve, it is “One Life” that has the most guts and qualities to become a classic itself. Both really excel on the title track and the uplifting “A New Day” (written by Bill). The mastery of holding back notes and not playing too many of them is cutely executed on the Miles Davis composition “Circle”. There is also a hymn-like tune (“Into Your Grace”) where I thought that there must be a lyric to that – an engaging piece that unfolds to a beautiful, appealing motif with both artists outstripping as perfect counterparts.

There is going to be a record release show for this album at New York’s intimate Mezzrow (163 W10th Street) on July 29th. Don’t miss.