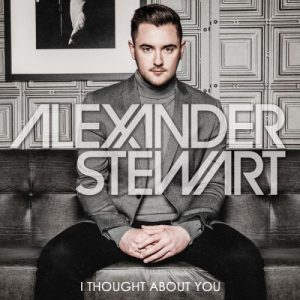 With his new album “I Thought About You”, released in September, Alexander Stewart from Manchester is now on a short tour through Germany. I know that comparisons with Michael Bublé are often made, but with Michael’s focus on more pop-oriented fare on his latest “Nobody But Me”, the swinging and crooning is now left to this young gentleman.

There are forays into pop here as well, like on the Stevie Wonder-penned opener “Part Time Lover” (has there been another cover version of this track?) where I thought that Alexander’s pronunciation of the word “part” is a bit odd, but nevertheless a welcome treat. Or two Burt Bacharach classics, “A House Is Not A Home” and “The Look Of Love”, where his strong voice that still retains some carefreeness, comes to the fore.

Alexander has opened for Dionne Warwick in 2012, performed with the Count Basie Big Band, and was hailed as “one of the brightest and best new jazz-influenced singers” after his 2011 debut album. On the album, he has worked with a full big band plus the Prague Philharmonic and there are also four original pieces here which move him more towards the singer/songwriter category, which suits him well (“Fragments”). There is also a remake of the Nancy Wilson classic “How Glad I Am” and a swinging take on Jackie Wilson‘s “The Sweetest Feeling”, both of which with fancy and fresh arrangements. And so Alexander manages to find just about the right balance between swing, pop, and jazz with his new album.

Here’s where you can catch him live: