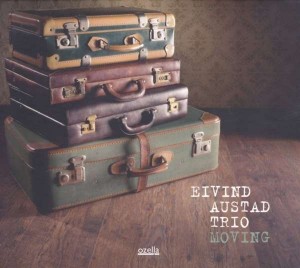 At home in Norway, pianist Eivind Austad is a household name in the young jazz scene in Bergen. Eivind is originally from Trondheim, way up north, but has made Bergen his home for the past 20 years. With “Moving” (out March 18th), his trio is now ready for an international career as well. And you could say better late than never.

Eivind was also trained in classical music and folk, like it is common in the Scandinavian countries, and his love for soul, gospel and r&b makes this new effort an interesting listening experience. And his solo piano introduction on the album’s opener “Two Of Mine” show his very lyrical and Bill Evans-like approach until bassist Magne Thormodsaeter and drummer Hakon Mjaset Johansen join him in subdued and elegant fashion. Eivind’s right hand fathoms out the boundaries in all directions. The compositions don’t really have that typical Norwegian touch (if there is one), but explore and touch upon all kinds of genres, if only slightly, like on the ruminated, soulful search in “Median”.

And some folksy elements shine through on the warm and comfy “Homeland”. The various layers on the tense and versatile “In The End”, again with remarkable right-hand work and some Keith Jarrett-like interpolations, make the piece well-rounded and carefully thought-through. There is a coherent final statement after a brief bass solo which is nicely embedded into the mix. The title track has some chamber-music like scales and remind me of some of Chick Corea‘s ECM works of the 70s.

There is a swinging approach to “The Moment Of Truth” where Eivind is more or less telling a lively and enthralling story and gives room to Magne and Hakon as well. But the nice thing here is that the bass and drum solo parts are not necessarily full-grown solo spots per se, but more a part of the scheme of things, of the overall sound concept and composition. It’s the most satisfying and pulsating piece on offer, transparent and lucid.

In addition to the six original compositions, there are two cover pieces by Cole Porter and David Bowie. Porter’s “All Of You” shows me quite plainly how important original material is. Not that there is no originality in the playing and interpretation of this classic, but it somehow falls short of the imaginative and at times brilliant ideas of the self-written pieces. Much more in sync with his own material is the choice of Bowie’s “Life On Mars” where Eivind’s playing gets severely ethereal, all vulnerable and bravely exposed.