Those were his words describing his band and what was going on on stage. “insane, out there, weird, spacy”. Indeed, the opening number was an atmospheric track right out of space, with a heavy and thick keyboard curtain from his Korg Kronos. It was the first time that I saw the keyboard maestro with his new band: Terrace Martin on keys, vocoder and alto sax, James Genus on bass and Trevor Lawrence on drums. There was a lot of free from, masterful interaction and some very creative and demanding solos, mostly by Herbie himself and Terrace. 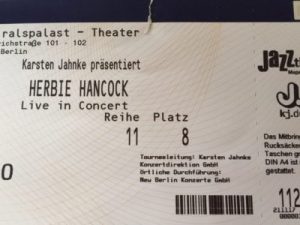 I’m glad that Mr. Hands was playing piano for maybe about half of the 90-minute set. There was no denying that even though he’s now 77, he is still the most inventive, creatively illuminating artist on his instrument. “In A Silent Way”-isms, from the Miles Davis LP of the same name from 1969, were included as well as more recent material, something that will maybe end up in one form or another on his next album, to be produced by Terrace Martin.

Herbie mentioned that a lot of new energy and new ideas are currently coming out of Los Angeles, referring to Terrace and his producing the groundbreaking Kendrick Lamar album. In fact, what he did with the various synth stuff he had on stage, with his singing through the vocoder and his alto sax playing, he was like Herbie’s alter ego. From the 1974 masterpiece LP “Thrush” (weren’t they all masterpieces?), the band played “Actual Proof” with Herbie switching to fast and furious clavinet sounds. Earlier last evening, he briefly played a chord on piano from “Butterfly” from the same album – I wish he had included that one as well.

My favorite part during the show at the sold-out Admiralspalast was his version of “Come Running To Me”, a track from his long overlooked and underrated 1978 LP “Sunlight” which was one of my first encounters with this superstar (the first was “Doin’ It” from the 1976 album “Secrets”). And here again, watching him play piano on this still amazing track, was a revelation (he switched from piano to keyboard for this one as well). He was using about a dozen synths and keyboards on the original, and was able to maintain the groove and funkiness of the track with far less elements. Terrace on vocoder was brilliant throughout this one.

The final track of this memorable evening was a spiced-up “Cantaloupe Island” and as an encore, another milestone from his career: his highly expressive synth solo on “Chameleon” on his strap-on remote keyboard made it clear that this never-ending adventurousness and curiosity and his wanting to push all boundaries, is what makes him the consummate artist.