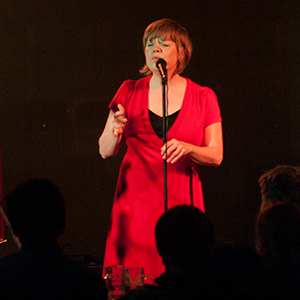 Randi Tytingvåg at b-flat on Sunday

The three band members walk up to the stage from the audience by singing an a cappella welcoming song before proceeding with the show. Norwegian singer Randi Tytingvåg presented her new album “Three” last night at Berlin’s b-flat club. The album was released at the end of last month and is a wonderful collection of songs encompassing all kinds of genres like Jazz, Folk, and Country. I met Randi in the early evening before soundcheck and she told me that for her, the lyric always comes first. That is why I got hooked again on classics like “Que Sera Sera” or “What A Wonderful World”. In Randi’s versions, you can’t help but follow each and every word she sings. She belongs to the few singers who actually live the lyrics and tell the story in an absolutely convincing way.

But there is another aspect to the uniqueness of Randi Tytingvåg‘s art: her band consists of two guitarists who also sing. And that is why the beautiful “Home”,for example, gets a special treatment by vocalist Dag S. Vagle who is a brilliant singer himself. The very optimistic “Keep Walking” describes the feeling you get after losing someone dear. Randi has a very special collection of cover songs: besides the already mentioned songs, she offered the Marlene Dietrich classic “Ich bin von Kopf bis Fuß auf Liebe eingestellt” (also known as “Falling In Love Again”) in German. Ever since she heard the German original, she never sang it in English again. Yet another aspect to her emphasis on getting the lyrics across because the original is much more intense.

Her voice can be bittersweet or heartbreakingly sad; other times she conveys joy (“Good Times”) and happiness. The harmony vocals on the evergreen “Let It Be Me” work so well, live and in the studio, that I was impressed to be able to actually find this worn-out tune very special again. Thanks also to the various string instruments that Erlend Aasland was playing: from the tenor guitar to banjo to cavaquinho. Even the piano was prepared so that it sounded like a guitar. The album was recorded live in the studio – another example for the utterly honest and straightforward outcome. 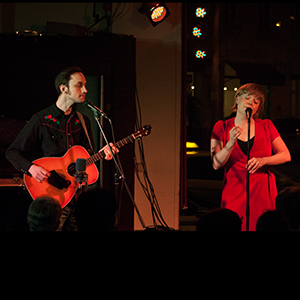 Randi told me that if there’s one song that would describe the essence of her artistry, it’s got to be Cole Porter‘s “Don’t Fence Me In”. She simply defies categorization and yet has a very distinct sound and style of her own. The Tom Waits tune “You Can Never Hold Back Spring” shoiws hercharming light vibrato and the appealing upper register. She accompanies herself on prepared piano while her two men sing backgrounds while standing in the audience. She also does one of the most intriguing versions of Joni Mitchell’s “Both Sides Now”.

And the six original compositions show the deep and introspective side of her: the line “What Would You Do If Today Was A Good Day?” from the very catchy “Change” lasts long into the night and beyond.

The concert was the end of her short release tour but she’ll be back. After the next two shows in her hometown of Stavanger on April 21st and 26th, here’s where you can catch her: