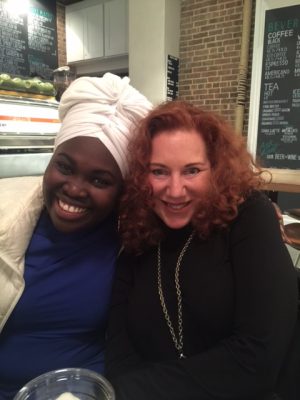 Cuban singer Dayme Arocena released a brilliant album last year on the UK-based Brownswood Recordings. Her irresistible mix of jazz, latin , and something like Cuban neo-soul is pretty unique and ecstatic. Listen to her six-track “One Takes” and you hopefully get the drift. At only 24 years old, Daymé is also part of Jane Bunnett‘s critically acclaimed project Maqueque and she is part of Havana Cultura, an organization that promotes contemporary Cuban artists and ended up on the Havana Cultura Mix album “The Soundclash!”, produced by Gilles Peterson.

That’s how she ended up on Gilles’ label and there is going to be a new album out in March. This is certainly an artist to watch out for in the future. She was also part of Friday night’s Winter Jazz Fest Marathon, an exhausting and extremely popular event spread out over several clubs in the Village. Her group consisted of Rafael Aldama (bass), Jorge Luis Lagarza Perez (piano), and Raul Herrera Martinez (drums).

Elsewhere in the city, it was showcase marathon. I was watching a few and can’t really recommend anything special. There was a certain buzz over singer, Broadway actress, and songwriter Shayna Steele. And yes, she has a great voice and she certainly can sing, but why would she belt out every single song she did? It was simply too much. It is maybe part of the problem that every showcase is only 25 minutes in length and you would want to squeeze everything in there and show what you got, but in her case, I was thinking ‘relax, have a break, don’t shout at us’.

The snow has calmed the city down a bit. Still, I’m glad to hide away in my quiet Crown Heights apartment