Happy New Year from Gina and her crew. Gina has spent the holidays way out west in the middle of nowhere on the Dutch countryside with almost no silly, stupid fireworks. Just in time to cure the cold grey Berlin January, here comes the ninth edition of this epic Modern Soul meets Northern Soul series from the guys at Real Side Records. 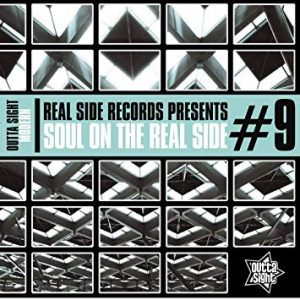 Highlights aplenty here with the 1971 Gene Chandler-produced “Boss Thing Together” by little known singer Kent Drake. Most of the stuff on here is from the 70s again with some tracks veering towards disco mood, like “Second Time Around” from Innervision. We also get the great Major Lance with a 1974 Carl Davis production, the soulful “Don’t You Know I Love You” and an early treat from the Philadelphia International roster, the 1975 “Hey Baby” from Anthony White.

Al Goodman and Harry Ray wrote “Wedding Ring” for the 1975 track by Timothy Wilson, produced by George Kerr, a veritable modern soul stomper which probably exemplifies the best of both worlds here (modern and northern). As usual, some totally unknown names appear, like the ultra soulful Willy Wiley whose dirty and strong soul voice meets with dapper brass and a pretty quick tempo on “Just Be Glad” from 1973. I like his screaming towards the end. Johnny Bristol produced the simply wonderful “Come On Back To Me Lover” by Margie Joseph. It’s from her 1978 Atlantic album “Feeling My Way” which features James Jamerson Jr., Lee Ritenour and Ernie Watts on ten outstanding tracks.

If there is one “hit” song among this collection, it’s got to be “See You When I Git There”, the 1977 Lou Rawls classic which gets a welcome feature here. Marvin Gaye is all over the contemporary “Do Something” by Ernest Ernie & The Sincerities. Lush and effective strings accompany the uptempo and optimistic “You Girl” by Wendell Watts from 1969. This great compilation concludes with “I Hear A Melody”, a somewhat quirky-sounding production (that strange organ sound is amazing) featuring a group called Spice Of Life, recorded in 1969. Great stuff indeed. Again.