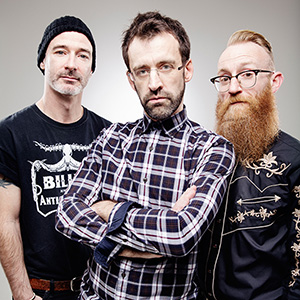 If there would be something like a Jazz Singles Top 50 chart, the songs by pianist Neil Cowley would fit in there completely. The short songs in their first set on Tuesday night at Berlin’s A-Trane were a prime example of surprisingly pulsating pieces.

Together with long time band members Rex Horan on bass and Evan Jenkins on drums, Neil Cowley displayed attention-drawing melodies with a swift stroke and lots of excellent harmonies from the trio’s rather short new album called “Touch And Flee” (it clocks in at a mere 36 minutes).

With his typical sense of dry humour, Cowley announced that they would play half of the new album in the first set, and then their hits in the second set. But for me, tracks like “Winterlude”, “Gang Of One”, or “Sparkling” are the new driving forces in the piano trio format.

What is especially sympathetic with this trio is the fact that, at least during the first set, there was not a single bass or drum or even a proper piano solo. This is not to say that I don’t like them, but it was a totally refreshing listening experience having someone turning this format upside down.