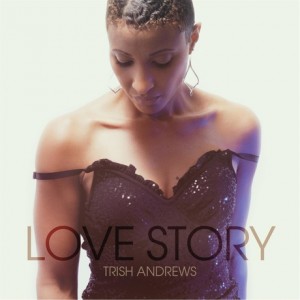 Independent soul singer and songwriter Trish Andrews from Charlotte, North Carolina, has come up with her second album after her 2008 debut “These Five Words”. Her new one “Love Story” continues her sexy melange of Jazz, Soul, and R&B, wrapped in silky smooth, sometimes stunning performances.

The solid 11-track collection starts off with the catchy “Feed My Mind” with its delicate backing vocal arrangement and crisp, but short guitar solo. Trish gets all svelte and sensuous on “I Want More”, complemented by soulful trumpet and sax, played by Jerry Oats and Adrian Crutchfield, respectively. The title track is a dramatic ballad which features Anthony Hamilton with a falsetto-like intro which changes to his signature, classy and well-rounded sound.

There is a wonderful breeze on the flute-led, midtempo “I Don’t Know” which is much too short and cries out for a longer version. Trish gets down on the neo-soul cracker “You And Me”, my personal highlight here with hints of Jill Scott. Trish’s voice is sympathetically unobtrusive, without any gimmicks, tricks, or artificial characteristics. The track lingers on in your head for a long time. Trish has opened shows for Kem, Maze featuring Frankie Beverly, and Eric Benet in the past and she deserves a similar following with her newest release.

More solid soul is offered on “Thank You” and there are some rock elements on the head-nodding “You” which sounds as if it could be a showstopper in her live shows. Another dramatically sweet ballad is “Again” about love lost, interrupted by a rap cameo performance by Adam Flitton which is not really my kind of stuff but doesn’t destroy the overall mood here. Tempo is up and danceable again on the very sexy “Swagga” with its infectious groove. We also get a moving duet with her daughter Whitney on “You Were A Girl” which sounds ripe for the charts.

And finally there is a jazzed up version of “Feed My Mind”, the opening track, with the smooth sax sound of Mike Phillips, reminding us that quality independent soul is not lost with this fine release.